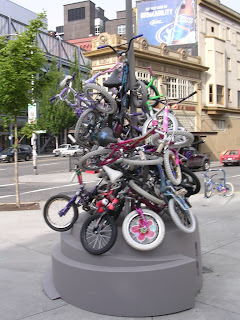 The bicycle sculpture across the street from the Burnside and 10th is something that I pass all the time. Every time I look at it and think how interesting it is. It makes sense that someone would make a sculpture out of bikes here in this city. The sculpture is called the Zoobomb Pyle and was created by Brian Borello, Vanessa Renwick and the Zoobombers.

The bike sculpture is composed of several children's bicycles of varying colors and sizes. There is a large group of bikes clumped together at the bottom and mounted on a concrete base. At the top of the pole there is one golden bike. It reminded me of a Christmas tree. In the bottom clump, the wheels and handlebars are all sticking out at different angles. The clump at the bottom creates a feeling of weight and mass, but there is also plenty of negative space. The sculpture could be viewed as allegorical, it tells the story of the great kiddie bike king of the hill.

To me, it is a colorful, joyous, and an interesting composition. It looks as though a bunch of kids decided to make a pyramid with their bicycles. Every time I pass it I feel as if I want to ride my bike down the hill and park it next to the rest as an offering.