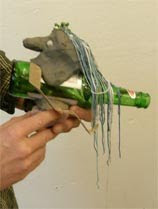 The "Beer Witch," as it has become popularly known, is a crude assemblage of clay, string, beads, paper, and a discarded beer bottle. A crudely modeled figure sits awkwardly atop the bottle,while crumpled paper eyes stare blankly ahead. Below the bulbous nose, the figure seems to bite painfully on the bottle with a toothless mouth, while catfish-like whiskers stream behind. From the top of its tiny cranium, strings form a vague likeness of hair, with beads, or possibly pre-chewed food forming a lumpen tiara. Little harmony is achieved with these disparate elements. Indeed, it's a wonder it holds together at all.
The culture that produced this object has been the subject of much debate among amateur archeologists and art historians. Sophistication in materials and execution makes it unlikely to have been made by an adult, and certainly not a sober one. The most widely accepted current theory is that a primitive tribe of drunken children produced it as a religious object. Perhaps by coincidence, stories abound in rural New Jersey of a pre-teen cargo cult, scurrying between drainage culverts and abandoned shopping malls. It is possible the molding of clay activated the magic properties of this figure, as in the tribal "fetish" sculptures found in many pre-industrial cultures. In this way, the children could try to influence the gods. The "Beer Witch" could then be used to pray for health, to harm an enemy, or to cause another beer truck to crash.

Matt Hall
Posted by Matthew Hall at 8:02 AM