"Capital Grandstanding: A Tragedy in 41 Acts" by Ronna Neuenschwander 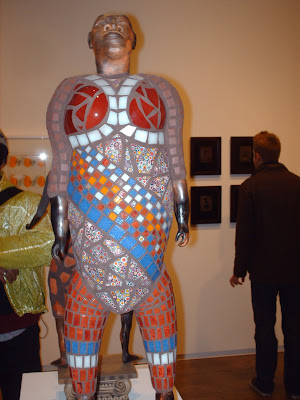 A wide variety of textures are present on the piece. The face, hands, and feet appear to be smooth and cool to the touch, while the ‘grout’ highlighting mosaic pieces appears scratchy and rough. There is yet another variation in texture seen in he mosaic tiles themselves appearing sometimes earthy, smooth, and dull, while other variations appearing shiny, new, and vibrant.

The repetition of color and material unifies the entire piece making sure the viewer doesn’t simply focus of the the lively aspects of the figure, but makes it way over the entire body. Instead of stalling at the vibrant red bulls-eye breasts, we are instead guided downward by complementary bules guiding us all the way to base. The same is done with repetition in the use of form and material at the starting point of the head followed by the balanced symmetrical hands and feet of the same style and color.

The piece is bizarrely serious and lively at the same time. This contrast is felt through the artisit’s choice of material and also the form. The use of muted earthy materials for the appendages and head creates a cool and serious feeling when contrasted with the bright lively mosaic pieces playfully arranged in patterns and shapes. I feel as though there is also a childlike defaced element to it as well. Maybe this is just my own mind, but I can picture this as the result of a kid viewing a serious and maybe somewhat boring sculpture and drawing designs on it specifically highlighting the breasts.

The previous humorous feelings are also successful due to the scale of the figure. The work itself is not larger than the viewer, but once it is placed on the the pedestal connected to the object, and then on top of another pillar pedestal display, I find myself feeling as though this funny little form gathered these heightening devices stacking them up and climbing on top to be at the viewers level in order to be taken seriously and show how intimidating it is despite its small bloated size.

There are contrasting element to the figure’s form as well. The same body parts made out of the muted material are somewhat realistic in their form. This is not to say there isn’t a playful element to them, just to a significantly lesser degree. The hands and forearms look silly and doll-like when connected to the ‘wiggly’ muscle-less upper arm. Those same flowing arms frame the figure’s body with a lack of negative space creating a much more pompous feeling rather than proud as the face would suggest it should be. The same can be said of the feet and shins, while not completely life-like when connected to the upper bow-legged thigh I’m left with the humorous feeling at the thought that they could even support such an inflated balloon-like torso. The body itself holds the shape and design of a cartoon owl while the serious characteristically African head sits atop glancing down. The end result of this juxtaposition is confusion over whether I am to take the piece seriously or not.