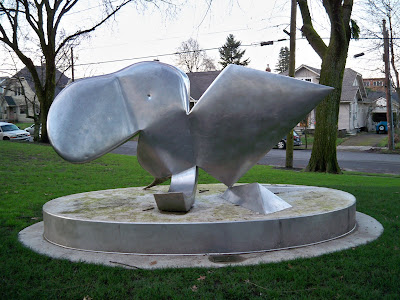 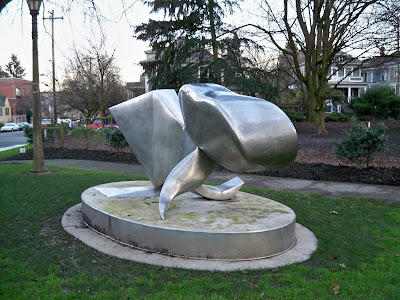 For this first Thursday assignment I didn’t make it to any galleries, but I walk past this strange sculpture from Wallace Park quite a bit and figured that it would do. This three dimensional piece was created by Manuel Izquierdo in 1980 and it is titled Silver Dawn. It’s measurements are about nine feet wide, and including the base about six feet tall. It is made from a silver metal, although I am not exactly sure what. To me it appears to be a giant seal or walrus, but because of the name, only having one eye, and only three possible legs it makes me unsure as to what it really is. The negative and positive spaces are really interesting, the large rather geometric forms seem to draw the most attention, for me anyways.

Izquierdo was born in Madrid, Spain in 1925 and came to America in 1942. He received his BFA at the Museum Art School in Portland, Oregon and went on to stay to study more and work in Portland. He was mainly a sculpture but also was well known for working in woodcutting and was later an emeritus professor at PNCA. He has done many other public art pieces in Portland including The Dreamer which I believe someone else did their previous first Thursday assignment on. Manuel Izquierdo passed away in July of 2009.