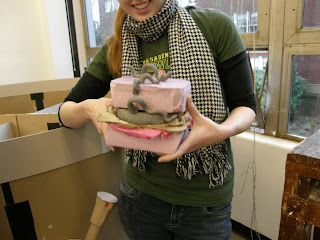 Often times art is overlooked when discussing topics like ancient civilizations. Indeed the frustrations are further aggravated when the particular subject of Art History arrives. In any global art history survey book available at ordinairy book shops, the "global" or "world" aspect of that art stems only to "The Great Wave off Kanagawa" by Hokusai, a painting by the Mexican artist Frida, and, if you're lucky, a small mention of Hiroshige when comparing Van Gogh's replications to the original Japanese wood block print.

This tendency to overlook one culture by a more prominent one causes great frustration for funding and for determining what an extinct culture may have looked like. Such is the case for this artifact from the Jagetagatejudi (pronounced já-gĕ ta-gá-tĕ jú̆-dĭ) tribe of Utah.

Little is known about the Jagetagatejudi Tribe except they arrived approximately 200 hundred years after the arrival of the Apache and Navajo tribes in the midwest in 1400 CE. By the time Jagetagatejudi arrived in Utah, the Navajo tribe had already well established their nation and their land.

Jagetagatejudi differed from their tribal cousins in they were much smaller and more peaceful, focusing on harmony with nature and their neighbors than worrying about expanding their lands and war. In fact, to date, no weaponry of the Jagetagatejudi tribe has been found other than sharpened skinning rocks and antelope traps (Jagetagatejudi being a name given by the Navajo tribe meaning "antelope". Little documentation of Jagetagatejudi language exists today so it is uncertain how they would have referred to themselves).

Given the little artifacts that exists today, this celestial, ceremonial sculpture was truly a remarkable find. It was found surprisingly close to Navajo ruins in the National Parks in Southern Utah. Please note that the intern pictures is actually holding the artifact upside down.

The thick pink slabs are thought to be representations of a thick cake made out of corn and suit made of rendered antelope fat and blood, hence the pink coloration. In order to duplicate this, the cakes were crudely duplicated through chiseling away chunks of pink Jurassic sandstone almost exclusive to Utah and the midwest. Some art historians speculate that there once was writing on the sides of these slabs, but since they have deteriorated greatly due to long term exposure to wind, it is unclear whether or not their was any particular pictographs or lettering.

The strange, grey worm-like creatures seemingly crawling along the slabs are made of the same material as the grey patty inside the sandstone. This grey matter is crushed sunflower seed and ash of the yucca tree, specifically rinds of the fruit of the yucca tree.

While it is hard to determine how many other layers there are within this ceremonial sculpture, three layers have been confirmed to be of antelope hide, dried meat, and pounded leaves of the Yucca tree.

Given the strange nature of this sandwich-like sculpture, what meaning can we determine from this? It is clear thanks to the location where this was found and what little we know of the Jagetagatejudi tribe (mainly through oral Navajo tradition), that there was great respect particularly for the sunset and sunrise. It is thought that the pieces of sandstone are to represent the harmony of the pink earth and pink sunsent, a unity of earth and sky, the ethereal and the mortal. The interior, being flattened and pounded by the vast nature of both earth and sky, are to represent a sort of natural hierarchy, antelope hide (typical material for Jagetagatejudi dress), antelope meat, and yucca. The large paddy of yucca ash and seeds are thought to represent the silhouettes of the mountains of Utah.

The "worms" crawling about the "sandwich" are actually representations of the arches of the Utah's great landscape. If depicted upside down, they are seen as gateways to the spiritual world.

From this brutish and fascinating piece we can both affirm theories on belief and learn about the Jagetagatejudi Tribe's religious practices. It is clear now that the natural beliefs of the tribe particularly emphasize the union between Mortal and Divine envisioned through the sunset and sunrise. This is truly a remarkable piece.
Posted by Emily C. at 7:06 PM