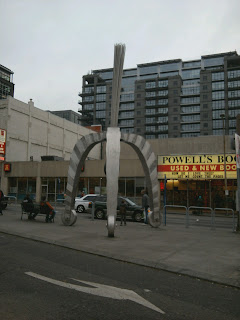 "Representing the infrastructure, energy, and vibrancy of Portland, this sculpture is made complete when a passer-by gives the pendulum a push".

While attempting to find a gallery through the Pearl District, I decided upon this sculpture to critique because I had no idea where the galleries were (yay for not thinking ahead), and I was shocked to see that this work moves.

"POD" by Pete Beeman and David Bermudez is a fairly interesting structure. Since this particular part of Downtown Portland is saturated with large, clunky sculpture, this particular piece was really pretty uninteresting the first dozen times I have come across it.

For those who have wandered through Olympic Sculpture Park in Seattle, Washington, perhaps Beeman's "POD" seemed to invoke the sculpture by Claes Oldenburg and Coosje van Bruggen titled "Typewriter Eraser, Scale X" from 1998. Both structures are made out of steel, a common material for many outdoor artworks. They both feature wheels similar to that of shopping carts, the wheel being attached with a part that covers the top of the wheel and connects to the body of the vehicle at the top of the cover. They also both feature long, thick cords that are focused in one single bunch. These large fronds, the typewriter's eraser in Oldenburg and van Bruggen's work and the pendulum in Beeman and Bermudez's, can be considered kinetic in that they do react and sway in the wind.

The largest differences between the two are that Oldenburg and van Bruggen's work is very playful not only with its scale and obvious representation, but also its positioning and placement. The Typewriter Eraser is oriented not along a flat part of the Olympic Sculpture Park, but along a hill connecting the top of the park to the bottom of a highway overpass. Rather than being oriented along a straight vertical axis, Oldenburg and van Bruggen have tilted the Eraser slightly on its side and back so that the Eraser's fronds bend behind it rather that in a random way. This gives the feeling that the Eraser is barrelling down towards the highway even though it is very much stationary.

Beeman and Bermudez's sculpture's tripod work, on the other hand, seems to have no set representation and is very straight and sturdy thanks to the bulky form and evenly placed legs. The straight steel color also makes it very concrete and lackluster in the grey cloudy weather. Because of this, it was truly a joy to find out that the sculpture itself is kinetic.

The pendulum which hangs in the center of the tripod legs requires a very tall person or an assisted person to give the pendulum a good shove. Using what appears to be gyroscopic axle so the pendulum can swing 360 degrees in its doughnut shaped setting. The very large fronds then vivaciously swing about, adding to the motion and creating a more dramatic trajectory.

Seeing such a languid sculpture suddenly burst into dynamic motion created an entirely different feeling. All of a sudden the negative spaces between the legs were changing dramatically and with an impressive ease.

While I am very much untrained in how to properly view contemporary art, I now completely understand the plague's small suggestion to interact with the sculpture and complete it by pushing the pendulum. Truly something very mundane became very fun and a little threatening thanks to the impressive size of the piece.

If you ever find yourself by Powell's and this sculpture is still, do yourself and the people around you a favor and give the pendulum a push. It was very surprising to how something as tiny as an axle can completely change a piece. This is more than likely the most unique bus stop in all of Oregon.