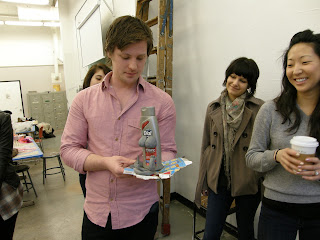 Art Students at PSU discovered during an archaeological dig an impressive 30 or more artifacts at a site they named the "Glory Hole". The group of Art Archaeologist has determined that the artist's intention for these artifacts was to create the Dumbest and Ugliest piece of work possible. With this information, the Archaeologist split into several groups each with varying opinions of what artifact they believed was most successful at being the dumbest and ugliest. An Archaeologist from the group that represented the dumbest of the dumbest and the ugliest of the ugliest was willing to share her analysis of their discovery.

"This assemblage of clay, cardboard and a Dial shampoo bottle was by far the dumbest and ugliest of the artifacts excavated from the site. The figure which appears to be the focal point, is a free standing found object that has been placed on top of a deconstructed macaroni and cheese box. The figure is constructed of a Dial bottle and juts out of the piece like a hideous monolith. The only modification to the found object is a pair of clay breast that have been superimposed on the front of the bottle. One colleague of mine described this figure as having "boobs drawn by a third grader", which accurately describes their form and realism. Placed at the foot of the boob monolith are two figures both made of clay. One of the figures seems to resemble a beached seal with a large fin across it's back, the other a snake with round, human like eyes on the top of it's head. Knowing that the objective of the artist was to craft something entirely dumb and ugly, these two figures really tie the piece together. Neither of them brings unity or harmony to the overall piece leaving the viewer confused, or wasting their time in trying to craft a logical explanation for their purpose when ultimately the purpose is nothing. Finally, the space that the piece utilizes is neither negative nor positive but has been determined to be a waste of space.