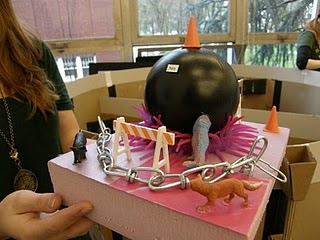 Probably dating back to the Renaissance era, this piece by an unknown sculptor is clearly documentation of the fictitious battle scene from the novel "Hairy the Monster" by Francis Henshawe (born 1387 in Florence, Italy). As the story goes, the townspeople of Harstad, Norway, encountered an attack from a massive sea urchin-like creature that had quadrupled in size and had subsequently washed up on the shore of the Norwegian Sea. This sculpture is depicting the scene where the townspeople attempt to protect the city by controlling the monster with chains, guard animals, and unusual orange and white geometrical structures. This piece is extremely important in showing that the sculptor was also consciously aware of Florence's political situation at the time. With the rise of the Medici family growing more and more powerful in Florence, this piece is a symbol of the struggle between the townspeople of Florence and the overpowering government. While using one of the greatest novels ever written as a platform for popular controversy, this piece achieves in symbolically recognizing the current events of Renaissance history.
Olivia Serrill
Posted by livyloo at 9:49 PM