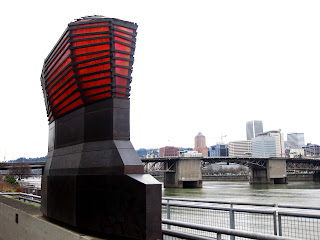 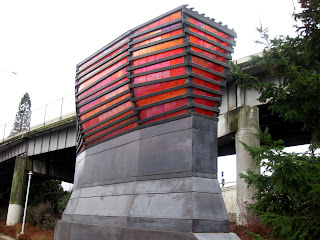 The “Ghost Ship” sculpture resides on the top of a stone barrier that is uniquely placed between a split section of bike path off the East side of the Willamette River in downtown Portland. Its location and freestanding design allows for all sides to be viewed by pedestrian traffic. Metal and glass were constructed to visually acknowledge ships that have traveled through Portland; specifically ships that have sunk crossing the Columbia River.

Linear lines form a hull around the red-orange glass creating an abstract shape similar to a cargo or steam ship; even the negative space between these bars in conjunction with the red-orange light from the colored glass insinuates the rough look of wooden boards nailed together in unity to form a ship. The massive sold metal under the delicate glass is balanced making the glass seem more weightless under the massive structure of the metal base.

Placing this sculpture next to the river has a specific context that was designed to enlighten the artwork. The scale of the sculpture is much smaller than an actual ship, but standing a few yards to the east of it gives the illusion that it is a massive ship floating out in the river. Also, the sculpture plays a duel role with its slight resemblance to a lighthouse; the red-orange glass illuminated by daylight has a resemblance to a spotlight or fire. This work is appropriate for its location because of its acknowledgment of many years of passing ships and it reminds us of how Portland’s history is uniquely intertwined with the river.

Posted by Harley Wilkins at 9:49 PM