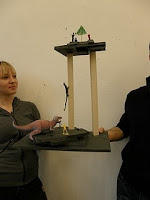 While exploring the ancient ruins in the outer reaches of Afflingem 5, I chanced upon this amazing example of pre-indocow design art. What at first looked to me like garbage that had been randomly pieced together was actually a very rare and delicate relic of the figurine shrine era. The artist probably intended the piece to be used at the beast worship ceremony that took place at the vermillion equinox. Composed of many humanoid forms the work is at least a partially figurative work and would seem to be an allegorical work as well. Being an assemblage and composed of many found objects, the composition is a wonder of negative space and a wonder that it holds together.