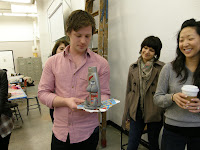 Found in an abandoned house, on the outskirts of Olympia, “Venus de Dial” dates back to 1968. Mire Gume, active in the arts from 1949, made this sculpture as her last attempt in the arts, before committing suicide a month after. Utilizing the remains of her boyfriend’s trash, Gume created a masterpiece. Clearly, this assemblage of clay, a plastic bottle of Dial soap and a cereal cardboard becomes a reinterpretation of the “Venus of Willendorf”. The clay figures of a snake and a whale create a story of lost love, divided by land, while the dominance of the allegorical figure, represents her heroic triumph against the world of the living. The contrast in the materials, particularly between the found objects and the organic clay, create a reference to the ancient world. Having added breasts to the Dial soap bottle made for men, the artist created a female perspective, added to the male-dominated art world. Mire Gume was one of lesser known founders of the Chabaka Jara feminist art movement, which rooted the more commonly know Riot Grrrl movement.