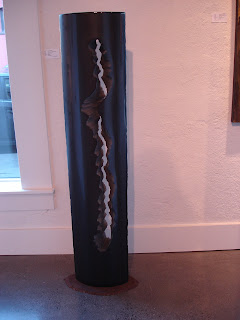 It was an adventure to wander the pearl and into every block seemed nestled at the very least two galleries with open doors. Although I had difficulty finding attractive three-dimensional pieces I found myself standing in awe inspired by the large canvases that depicted surrealist/impressionist scenery that seemed to grow into three-dimensional space and the shiney, glossy, and metallic textures that caught my eyes that wandered and searched for something good to like at. One of the more intriguing 3D pieces I found was this 4-foot freestanding basalt sculpture with a flat bronze base by Pasha Stinson. A small blemish or imperfection was what initially caught my attention. Between the canyon of negative space a small spider had built a web. Immediately I was reminded of a cave I was in on the Oregon coast. Looking through the intricately carved ridges I would have seen waves crawling up the shore. Instead, I could see a perfectly plain white wall except for the presence of the humble spider, which I must say really made the piece for me. The presence of life made it seem like something that had grown out of the ground, the way I would imagine the monolith from 2001 A Space Odyssey. The way the ridges were carved to compose the negative space appears natural by taking perfection away from the piece and making it asymmetrical and adding variety. Another thing I liked about this piece was that the negative space is obviously the focal point. The anterior had dominance with it's smooth, polished basalt surface while looking through the negative space provided a much softer, more inviting texture that was less refined and lead to the posterior. Viewing this piece from the back made me feel like I was looking at a sheet of rock that had fallen away, even though the mark making and general form of the piece suggested it was purposefully modified.
Posted by Michelle Marie at 7:08 PM