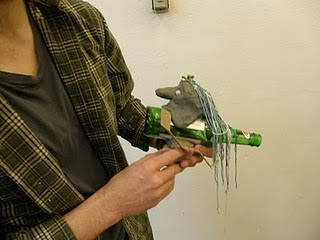 While excavating for new construction near Amman, Jordan, a plaster and painted head of a Neolithic Stone Age Goddess was discovered buried several feet down. As workers were clearing boulders from a hole, they caught the glimpse of a bright green glass like substance. Upon further investigation they revealed the plaster figure head believed to be a fertility goddess of some sort. Archeologists estimate the piece to have been made between 6750-6250 BCE. It has been authenticated by leading Neolithic Archeologist Niles Greenhart from Bristol, England.
Upon release from the Jordanian government, the Goddess Sculpture will be sent to Bristol for further study. Of special interest is the green glass like substance the plaster head sits on.