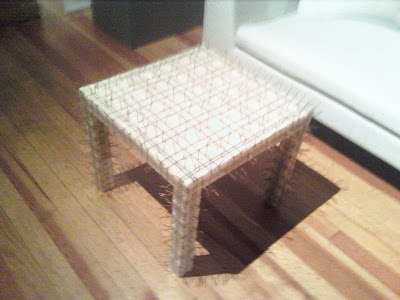 I really enjoyed my visit to First Thursday. There seemed to be a lot more going on at this one compared to the previous First Thursday. For instance the Portland Auto Show was in town this weekend and as a result, there was a small auto show in the middle of the main strip in the featuring many classic cars and motorcycles. Although I enjoyed looking at all the cars and bikes, the piece I chose for this week’s assignment was from a gallery. I somehow forgot to check for the title of the piece and the name of the gallery it was in. The piece itself was either a couch-side table or small coffee table. On all the visible surface of the table was a dense foggy glass that almost looked like it was plastic. The glass was cut into square sections and there were lines on the glass that made the top of the table look like some sort of grid. Protruding from the glass were pairs of small copper wires. The wires were coming out of holes in the glass and were equally spaced from one another. From afar the wires looked like wavy hair that would be seen on a balding man. Up close, the wires and glass reminded me of what c4 or a bomb would look like. The whole piece had this strong feeling of danger. I also liked the fact that the artist took away the main purpose of the piece’s original form. It looks as if the piece can no longer function as a coffee table. I liked how the piece was presented; it was placed in front of a couch as if to look like an ottoman. That thing would be a really uncomfortable ottoman.