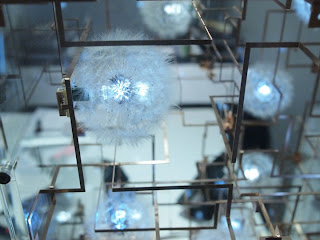 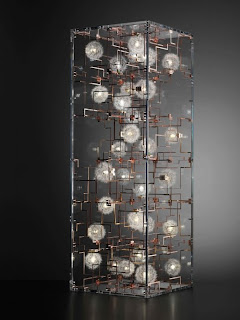 I love this piece I saw at the Carpenter's Workshop Gallery in London by Ralph Nauta and Lonneke Gordijn. The top picture is a detailed picture that I took myself and to show the entire art piece, I've included the second picture from their website. This piece was part of a series called "Fragile Future" and is entitled Fragile Future 3.9. It is 25 in x 8 in x 8 in and made of real dandelion seeds, bronze, LED lights, and plexiglass. The designers glued actual dandelion seeds on to LED lights and call them "clocks" to remind the viewer of the passing of time. The piece is meant to combine nature and science to show the need for equilibrium between the two.
This freestanding piece is an abstract construction of bronze in a geometric shape meant to resemble a circuit board. The right angles create invisibles planes throughout the piece. Plexiglass encloses the dandelion clocks and bronze, drawing attention to the negative space created by the bronze. The uniform angles in the bronze structure and the repetition in scattering of the dandelion clocks create movement throughout the artwork. Although there is variety in the pattern of the bronze and dandelion clocks, the usage of the two materials and uniform shapes add to the simplicity and unity of the design. There is contrast between the two materials used in the piece. The texture in the dandelion clocks is light and airy in comparison to the sleek bronze. There is also value contrast between the materials. The dandelion seeds combined with the LED lights are especially bright and the bronze is dark.
The piece is stunning in real life and the dandelion clocks are created with such care and made to scale to resemble actual dandelions. They look delicate and soft and this is accentuated by the glow of the LED light. The juxtaposition of the organic dandelion clocks and the convoluted angular pattern of the dark bronze really achieves the message of the designers, that nature and science are dependent on each other and can create a perfect marriage in equilibrium.
-Vivian Hsu
Posted by Viv at 1:37 AM