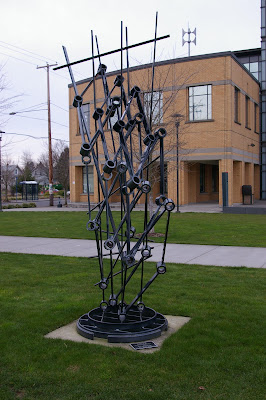 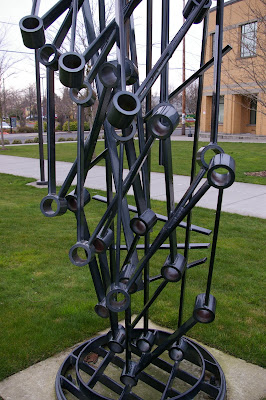 Mylan Rakich’s sculpture titled “Shine” stands in the courtyard of PCC’s Cascade campus. The steel sculpture is composed of many intersecting and interlocking linear pieces often forming a multitude of various geometric shapes. These shapes are contrasted by open cylinder shapes. The linear pieces for the most part are oriented vertically creating a sense of movement for the viewer as the eye tends to work its way up the the sculpture and then back down again.

However, these cylinders seem to interrupt this movement for a moment forcing the viewer to pause along the vertical trail when reaching one to observe what is being framed by the circle. It then allows the eye to continue on it’s vertical path until it reaches the next cylinder for again another pause. The cylinder’s framing capabilities come from the use of negative space. Negative space is distributed though out the piece as well, in the open areas of the created geometrical shapes. This construction forms a felling of mass webbing or netting.

The shape of the object seems to taper or narrow towards the bottom as it becomes connected to its linear and circular base. With this shape a sense of escape or explosion is formed. The piece is titled “Shine” which may have influenced my observations, but I do get a sense that a beam of light is being emitted from the ground. I also thought it’s title might be a reference to what kind of interesting shadows might be created by the variety of shapes and depending on where the sun is shining from. However, there is not much cement at the base with mostly grass surrounding the object without much to contrast with shadows. If that was the intention, the feeling would most likely be lost due to this placement.