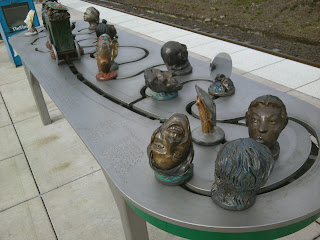 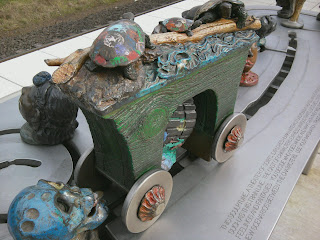 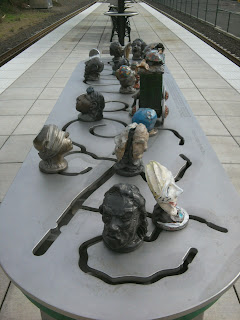 Unfortunately because of several large projects being due next week, I didn't make it to First Thursday and decided to choose an art project a little easier for me to access.

This particular piece called the "Tigard Interactivator" became my focus due to the playful nature as well as this being part of a set. The first time I've ever seen this table of bronze heads was driving past the Tualatin MAX station on Boonesferry Rd. near Haggen. I did not expect it to be such a wide spread set with Interactivators not only in Tualatin and Tigard, but also in Beaverton, Wilsonville, and at the Hall/Nimbus Station.

For the Tigard Interactivator, the faces are bronze cast with I'm guessing a sort of resin or enamel over them. Some are extremely colorful while others much more plain, choosing only a patina and buffed bronze for definition. Each face has a name like "The Vegetable Head", a potato looking face, "The Blind Head", a head with a scarf tied around the eyes with a mirror attached to the back of the head, and, my personal favorite, "The Mirror of Illusion", an oval, chrome plate almost an inch thick with a small head on one side of the mirror and the small head of a terrapin on the other.

All the heads and a large train engine are set on a steel table that has twisting paths so someone who is waiting for the MAX can entertain themselves by scooting the objects from one side of the table to the other. Given that the paths look limiting at first, they are set up in such a way that a head can move into a "dead end" on the path to let another head be moved past.

The intention of this work was made very clear with an engraving. In one inch tall letters, the artist has written this message:

"This sculpture, a theater of sorts, explores human interactions fround in places where people come together, such as a train line. The cast of characters express various traits, gestures, states of mind, emotions, feelings and fantasies. You decide who goes where and what path they take. By activation you will create new scenarios between the characters. Use your imagination, trust your instincts, and have fun."

My initial reaction to this work while walking past it was the assumption that it was some sort of recreation of buildings or architecture, maybe an interpretation of the map of the transit lines. I had seen children moving the pieces around a couple of times, but it wasn't anything too interesting. A closer look makes me think that this is really a great idea. The faces are all very different with big personalities. For something made of bronze, typically drab in coloration for public art, this is a very lively piece and much preferred to standard commissioned public art in which the artist is often restrained from utilizing their full creativity.

I love that this is one part of a rather large set along the Max WES line. Even though the line is obviously connected by track, having this reoccuring art really makes the line feel unified and offers the same interest when a child goes from one playground to another, all the essentials are there, but the different placement make it interesting, new, and fun. I also like that children are considered in this. Many, many times I have seen children running around restlessly, being harped on by their parents to hold still or the children squatting off in a corner trying to entertain themselves. These Interactivators give them something to think about, something to play with, and while they can't pick up the heads, the ability to scoot them along the tracks with very minimal effort makes them very accessible. This is not to ignore the older transit rider who just needs something to do while waiting.

All in all, while at first kind of funky looking, The Interactivator series was a great investment for the cities involved on the WES line and for Trimet as a whole.