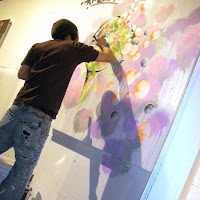 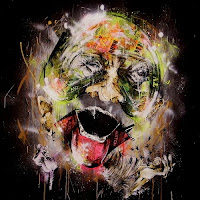 I attended an event for the Japanese-American community of Portland this weekend. There were lots of different things happening like musicians and a live and silent auction. One thing in particular, however, caught my attention and that was an artist creating his art live. Japanese artist Taka Sudo was up on a wooden dais painting among all of the noise and distraction. Sudo had three small canvases each about 3 feet tall and 2 feet wide to create a triptych. Many people were watching him and mingling around him as he created, yet amongst all of that distraction he was somehow able to be both artist and art.

While he was painting, Sudo was creating art. Creating in front of an audience of hundreds people seemed to border on performance art. Perhaps it was an illusion because he was up on a dais , but it was the moments of pause, stillness, and intense focus of creation when he was not painting, those times when he was not performing that he became part of his artwork and the whole scene became the art. When he resumed painting the moment was gone.