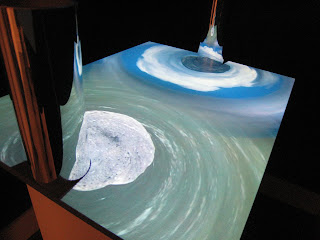 During my travels through the galleries at First Thursday I discovered the work of Ethan Jackson inside Chambers@916. Jackson’s work title ‘Strait’, was an interactive video sculpture using digital projection onto a tabletop pedestal and mirrors. I later learned that Jackson is known for his anamorphic video work and optical installations (http://www.ethanjackson.net/).

The image projected onto the table-like surface displayed two abstracted rings of swirling colors opposite of one another. One ring consisted of blues and white flowing steadily in a counter-clockwise direction, the other a sea green and white spinning clockwise flowing at a much faster rate. When focusing on the projected image the swirling bodies look abstracted and flat, two-dimensional. Mounted on apposing sides are two cylindrical mirrors, each centered as the axis for each swirling ring. When the viewer focuses on the mirrors the image from the table surface is reflected onto it, revealing a new perspective of the image. The cylindrical mirrors transform the two-dimensional image into a three-dimensional image. The swirling colors of blue and white become clouds moving in the sky. The swirling colors of green and white become a whirlpool of water. The image that at first appeared as an abstraction becomes recognizable, changing the relationship of the images the viewer initially had.

I enjoyed Jackson’s work ‘Strait’ for it’s playfulness and it’s ability to create two entirely different perspectives of the same image. The movement of swirling colors was hypnotizing and aesthetically pleasing in-of-itself, and then he surprises you with a new way of looking at it. If you are curious to know more about anamorphic art I attached a wiki site that explains it quite well http://en.wikipedia.org/wiki/Anamorphosis.