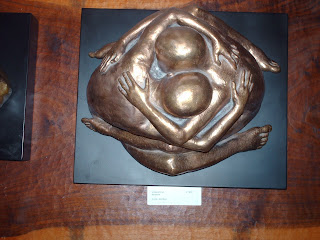 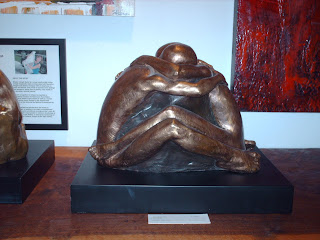 I try to avoid venturing into the Pearl at all costs, so i was pleasantly surprised when driving by SW 1st, there were two neighboring galleries with lights on and open doors. The first looked like a kiosk turned into gallery filled with airport art, the kind you might run by in Salt Lake City while late to catch a plane. Needless to say, as fun as it would be to dissect an art piece i couldn’t stand, I just couldn’t bring myself to go inside. The next gallery was a block away which looked only slightly more promising. Not wanting to make to make a night of it, the Attic Gallery seemed it would have to do. While the airport kiosk theme was still present, it was overwhelmed by the feeling that several high school art finals had gathered for my viewing. Hidden between large ceramic mushrooms and painted dogs and cats, there were two small freestanding bronze sculptures placed on a low bench like display in an adjacent room. These seemed to have been easily overlooked with the surrounding chaos, and maybe that is why this piece spoke to me, both it and I felt completely out of place.

Between the two figurative bronze works, I was drawn to the one titled “Embracing” due to the obvious tension of the piece which I knew would give me at least one vocabulary term to utilize. The muscles, posture, and tension give the feeling that this is not just a photograph of a moment in time; it seems to be happening before you eyes- the strain, the stretch, and two people reaching out and clinging to one another. There seems to be certain allegorical theme to this piece as well. While the faces are not visible, emotion is expressed through the bodies, form, and posture. Even with the angle in which the two heads are hung, and their sitting positions show this is not a simple happy, or casual embrace, there is a much more deep and maybe almost painful emotion taking place between the figures. The low placement of the bench, or display, upon which they are placed created a nice aerial view of the symmetry and balance of the piece. I’m not familiar with the bronze work or the process in which they are made, but by the artist leaving dark mass of negative space in between the two, instead of carving them completely free, still contrasts the two forms from their surroundings, but it also creates more of a feeling of a bond between them. It is not simply an emotional embrace or hug joining two figures, there is more between them, they are one.

I’m not sure if it was due to the context in which I discovered this piece, or if I would have still picked it out in a more copasetic environment, but whatever the reason, something within the work spoke to me. I’m glad I was able to give it a moment of deserved appreciation in the midst of over-sized and overdramtic cat/dog/mushroom stolen spotlight.