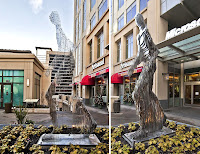 Julian Voss-Andreae prominently works with the welding process, creating large-scale, public installation sculptures. Currently, some of his work is displayed at the Presentspace Gallery in the Pearl District. The show stands as a teaser for his larger works, meant to be seen within nature and the city, rather than a white-walled enclosed space. Through his work, Julian Voss-Andreae attempts to captures the human and artistic connection to science.

Different from his abstracted, geometric work, portraying cells and chemical structures, this show includes figural works. The “Quantum Man” is composed of thin and flat, biomorphic plates, placed vertically to create an overall abstracted male figure. Essentially, this figure is free-standing, built from powder-coated steel, shaped to be 50” high, 22” wide and 9” deep. From the side, the figure becomes a composure of lines, implying the mass of a running man. The shape stands unified with thin metal pins, set in between the plates. Julian Voss-Andreae uses the Gestalt approach to sculpture, which is influenced by his background in science. In what he calls his “quantum sculptures”, Voss-Andreae uses an interdisceplinary approach to sculpture, by exposing the internal structure of the figure. The implied motion, set through emphasis on the negative space of the figure, Voss-Andreae puts a question on the metaphorical weight of a human being.